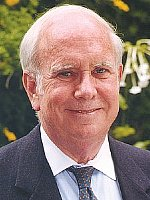 Dr. Peter H. Raven, born in 1936 and one of the most prominent botanists in the U.S., has served as Director of the Missouri Botanical Garden for over 30 years since 1971.

Dr. Raven, who specializes in plant taxonomy, published the results of his research work on the coevolution of flowers and insects in 1965, blazing the trail in what is now called “floral biology”. Since then he has produced outstanding achievements in the systematic biology of plants, especially those from tropical regions. In recognition of his distinguished work, he was elected to membership in the National Academy of Sciences at the tender age of 36.

Dr. Raven is also a leading advocate for conservation and biodiversity. Focusing attention on seriously endangered species around the world, he has argued since the 1960s that preserving biological diversity around the globe is essential to the survival of human beings. In addition to the academic community, he also appealed to national governments and international organizations to take measures to conserve biodiversity, paving the way for the conclusion of the international convention on biodiversity at the 1992 Earth Summit.

Dr. Raven’s activities are not limited to the U.S., but have expanded on a global scale. He co-edited the English language Flora of China (25 volumes), covering all known plants in China, together with Dr. Wu Zheng-Yi, Professor of Kunming Institute of Botany, Chinese Academy of Sciences, and the winner of the 1999 (7th) International Cosmos Prize.

Dr. Raven’s other major achievements include nurturing the Missouri Botanical Garden, the oldest botanical garden in the U.S., from virtually nothing to a world-class institution of botanical research and education. He has also played an important role in developing public awareness about science by serving as Chairman of National Science Board, which supervises National Geographic magazine. Given his approach toward issues concerning life on earth from a global viewpoint and his significant contributions toward promoting the co-existence of nature and human beings in both academic and practical terms, Dr. Raven well deserves the International Cosmos Prize.