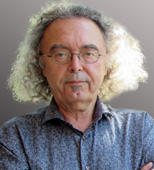 Dr. Augustin Berque is a distinguished French human geographer and philosopher, who has made his own research and suggestions regarding The Harmonious Coexistence between Nature and Mankind, on the basis of the concept “the Earth as our fūdo (風土 milieu).” This year’s International Cosmos Prize is awarded to Dr. Berque in recognition of his outstanding achievements in establishing a unique environmental anthropology. Since it is based on the Oriental view of nature and corroborated by his fieldworks in Japan, China, Mongolia, etc., this one-of-a-kind discipline differentiates itself from conventional environmental sciences and ethics, which are built on the Western view of nature.

Dr. Berque served as Professor at the School for Advanced Studies in the Social Sciences (EHESS: Ecole des Hautes Etudes en Sciences Sociales) in France for many years. He has also spent over 12 years in total in Japan to conduct research and education activities. This experience has made him well-versed in Japanese culture and history. Profoundly inspired by Fūdo, authored by the Japanese philosopher Tetsurō Watsuji (1889–1960), Dr. Berque translated this book into French. By further elaborating, deepening and evolving Watsuji’s concept of Fūdo, Dr. Berque organized his own thinking about landscapes and scenery, so as to develop a new academic discipline called “mésologie (fūdogaku 風土学).” Moreover, based on the theoretical results of mésologie, he proposed a theory about the subjecthood of nature, which holds that nature has subjectivity, while critically overcoming anthropocentrism in the nature-culture dualism and environmental ethics. Traditional environmental ethics unilaterally asserts protection of the natural environment, on the basis of human subjecthood alone. On the other hand, his theory of nature’s subjecthood based on non-anthropocentrism argues that the subjecthood of humans and nature both should be recognized, and that we should aim to re-establish the relationship between nature and people. Consequently this theory has provided environmental thoughts with a revolutionary perspective. Dr. Berque’s notion has raised strong objection to criticism that considers the fūdo theories as a whole to constitute environmental determinism, thereby impacting the theory of life on our planet, biological sciences, as well as Western-oriented philosophy and sciences.

Dr. Berque emphasizes a fundamental distinction between environment and fūdo (milieu). The former is on the physical natural or ecological level, whereas the latter is both physical and sensory at the same time. In other words, while environment can be scientifically studied as an object, fūdo (milieu) is fraught with human subjecthood, and therefore considered to be formed between a subject and an object.

To put it another way, Dr. Berque’s mésologie draws a line between itself and Western environmental sciences and outlooks, which are based on the premise of an either-or choice between physical and sensory. In his notion, he consistently maintains a critical attitude toward modern mindsets, by pointing out that the underlying cause behind overall environmental devastation is the fact that modern subjects have denied their mediance (fūdosei 風土性). This viewpoint shares a certain similarity with that of Japanese traditional thoughts and practices, which have sustained cultural aspects like satoyama and satoumi (respectively, natural woodlands and coastal areas that are connected with the lives and livelihoods of local inhabitants). It also has something in common with the Oriental view of nature, which aims toward living in perfect harmony with nature. This notion is reflected in his book Le Paysage au Japon, en Europe, et à l'ère du paysagement (Landscapes in Japan and in Western Europe, and the Age of Landscaping).

Based on the theory of mésologie, Dr. Berque has reexamined the concepts around nature and the subject, thereby reaching the conclusion that in contrast to machines, nature should have subjecthood, in a certain form and to a certain extent, as long as it is alive. In other word, he considers that nature as a living entity has its own subjecthood that determines its 趣 (sens), namely, the direction it should take.

Since the 2011 Great East Japan Earthquake, Dr. Augustin Berque has frequently visited the disaster-hit regions, and participated in many symposiums in Japan. At the same time, he has offered valuable advice regarding reconstruction plans for the affected areas, using the keyword sappukei (literally “killing the landscape”, in contemporary Japanese meaning dreary, desolate, etc.). This is an example that demonstrates the usefulness of theories on fūdo, in finding solutions to specific issues.

It can be said that Dr. Berque’s environmental anthropology seeks to reconsider the relationship between nature and people, and provides us with an important philosophical insight that helps determine a better direction for human survival in the future. In summary, his theory can transform our image of the global environment, from one of Spaceship Earth, which stresses resource limitations, to one of the Earth as our fūdo (milieu), whose essential elements are resources, restrictions, risks, and amenities. The accomplishments of Dr. Augustin Berque will add a new page for the principle of the International Cosmos Prize: The Harmonious Coexistence between Nature and Mankind.