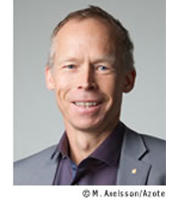 Dr. Johan Rockström is an energetic environmental scientist hailing from Sweden. He is the Executive Director of the Stockholm Resilience Centre, the global hub for resilience research, and also a Professor in Environmental Science (with emphasis on water resources and global sustainability) at Stockholm University. From 2004 to 2012, Dr. Rockström served as the Executive Director of the Stockholm Environment Institute, a world-famous research organization.

Dr. Rockström has been active as a leading scientist on global water resources and strategies to build resilience in water-scarce regions of the world, primarily in developing countries. He has authored over 100 research publications (including more than 50 peer-reviewed scientific articles) and several books in such fields as global environmental change, resilience and sustainability, agricultural water management, watershed hydrology, global water resources and food production and eco-hydrology.

Dr. Rockström has become known to people around the world transcending the confines of the academic community, since the publication of research findings on “planetary boundaries” by a group of 29 internationally renowned scientists, in which Dr. Rockström acted as the lead author. The group cautioned that we have reached a saturation point in terms of human pressures on the Earth System, and that if we let the anthropogenic pressures continue increasing to cross the thresholds of resilience inherent in, for instance, the climate, water environments and ecosystems, there is a risk of irreversible and abrupt environmental change. Dr. Rockström et al. proposed the idea that, by identifying planetary boundaries within which humanity can continue to develop and thrive for generations to come, we can avoid changes that would prove catastrophic for humanity, and asserted the importance of understanding where the tipping points of such changes lie.

The concept of planetary boundaries was first presented in a paper in 2009. Its full text was published in the journal Ecology and Society, and then an edited summary appeared in the scientific magazine Nature. The number of citations for the former stands at about 3,000, and the latter, about 2,000.

These papers assessed the boundaries for nine planetary systems—climate change, ocean acidification, stratospheric ozone depletion, biogeochemical flow boundary (nitrogen and phosphorus cycles), global freshwater use, changes in land use, biodiversity loss, atmospheric aerosol loading, and chemical pollution—although the latter two of these have been not yet been quantified. The results are graphed in Figure 1, which indicates that humanity has already transgressed three of these boundaries: climate change, the rate of biodiversity loss, and the rate of interference with the nitrogen cycle.

The concept of planetary boundaries and its demonstration results have had a great impact on many researchers pursuing global environmental studies, as well as on the initiative of Future Earth, an international framework to coordinate transdisciplinary research toward the realization of a sustainable Earth.

In addition to remarkable international research achievements in the area of interdisciplinary environmental science, Dr. Rockström has outstanding coordination capability, which is evident in his role of integrating planetary boundaries studies; he has led a group of world-renowned researchers, so as to successfully compile systematic research results that have a strong impact on the international community, and to render them easy-to-understand for the general public. He also possesses excellent presentation skills, as exemplified by his lecture for Technology Entertainment Design (TED).

In view of the reasons stated above, Dr. Johan Rockström is fully deserving of the International Cosmos Prize, whose basic concept is “The Harmonious Coexistence between Nature and Mankind.

Figure 1. Beyond the boundary (Source: Rockström, et al. 2009, Nature, Vol. 461). The inner green shading represents the proposed safe operating space for nine planetary systems. The red wedges represent an estimate of the current position for each variable. The boundaries in three systems (rate of biodiversity loss, climate change and human interference with the nitrogen cycle), have already been exceeded.