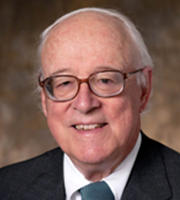 Diverse life forms coexist on the Earth. The distinguished U.S. marine biologist and ecologist Dr. Robert Treat Paine has demonstrated, through explicit field experiments, that predators play essential roles in the stable maintenance of biotic communities. Dr. Paine has had great impact not only on ecology, but also on conservation biology, as well as on the general public’s understanding of biodiversity.

When he was an assistant professor at the University of Washington, Dr. Paine engaged in experimental research on biotic communities comprising multiple species, including limpets, on rocky intertidal shores. He found that when a common starfish (Pisaster ochraceus) - a top predator of the food web in the experimental areas - was removed from a community, the entire community collapsed, and a species of mussel (Mytilus californicus) became predominant. Dr. Paine was first in the world to demonstrate experimentally that even a single species with a small population may be crucial to the stability of an ecological community, and that predators having negative impact on other species play vital roles in maintaining entire communities. He published this work in the American Naturalist in 1966. In 1969, in the same scientific journal, he proposed the concept of the keystone species, which refers to a species – such as the above-mentioned starfish – that, relative to its abundance, has a disproportionately large effect on its environment and plays a crucial role in maintaining the structure of an ecological community. A series of Dr. Paine’s works has brought new perspective to the field of community ecology, which addresses biodiversity; the series has been widely cited not only in ecology textbooks, but also in high school textbooks in Japan.

Although Dr. Paine’s work on the starfish was conducted nearly half a century ago, its significance is still highly valued today. For instance, in 1995 Dr. James A. Estes and Dr. David D. Duggins published the results of their studies of kelp forests around Alaska and the Aleutian Islands, proving that the sea otter (Enhydra lutris), as a top predator, plays a pivotal role in maintaining the biodiversity of kelp forests. As well, a report on the conservation of mammals in North America, edited by Dr. John Terborgh and Dr. Michael Soulé, stated that: “the absence of top predators appears to lead inexorably to ecosystem simplification, accompanied by a rush of extinctions.” A book published in recent years “Where The Wild Things Were: Life, Death and Ecological Wreckage in a Land of Vanishing Predators,” authored by William Stolzenburg (Japanese translation published by Bungeishunju Ltd., 2010), describes the importance of predators in preserving biodiversity.

Interdependence and interaction among various life forms enriches the Earth. This is not simply a matter of cooperation and collaboration; eat-or-be eaten struggles and competition also play essential parts. Dr. Paine has clarified these facts using very explicit approaches, providing important guidance for considering present-day biodiversity. This achievement has made Dr. Robert Treat Paine truly deserving of the International Cosmos Prize, which upholds the principle of “Harmonious Coexistence between Nature and Mankind” and rewards optimal solutions to the preservation of biodiversity on the planet.