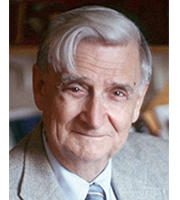 Dr. Edward Osborne Wilson has accomplished outstanding achievements in his research into the natural history of ants and ethology. He has focused his scientific perspective and experience on helping to illuminate the human circumstance, including human origins, human nature and human interactions. Dr. Wilson has also been active in practicing biodiversity conservation and environmental education.

Dr. Wilson’s specialty is myrmecology, the study of ants. In 1967, The Theory of Island Biogeography was co-published on the basis of, work he conducted regarding the classification and ecology of ants in New Guinea and other Pacific islands, and in the American tropics. The theory of island biogeography, featuring the concepts of species equilibrium and r-K selection, has now become a cornerstone of biogeography and conservation biology, and has led to the development of modern landscape ecology.

Another theory he used to explain the behavior of ants, which are social insects, led to the establishment of “sociobiology” as a new academic discipline. Sociobiology initially generated worldwide controversy, since it asserted that genetics have a much greater effect on social behavior of humans than had been previously accepted. However, sociobiology has now become part of mainstream biological and sociological thinking, and joint researches have been carried out involving sociologists and philosophers.

In his book Consilience: the Unity of Knowledge (1998), Dr. Wilson proposed that knowledge of all types, ranging from science to humanities and even to such areas as human behavior, can profitably be studied together, in an interdisciplinary manner. This conforms well to the objective of the International Cosmos Prize, which advocates the application of integrated and inclusive approaches to the resolution of various social and environmental challenges. This conformity is of extreme significance, at the time when the Prize commemorates its 20th anniversary.

Dr. Wilson’s ideas, originally developed through the study of ants, now center a world view in which the continued existence of humanity requires integrated research. His environmentalism, based on the importance of biodiversity, embraces the values of “harmonious coexistence,” recognizing that humans and all other animals are part of the natural world. Dr. Wilson’s achievements are therefore truly deserving of the International Cosmos Prize, whose governing principle is the harmonious coexistence between nature and mankind.