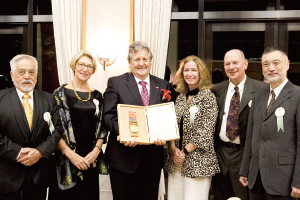 The Scientific Steering Committee (SSC) of the Census of Marine Life (CoML), (Secretariat: Washington, DC, USA), provided overall governance to the CoML, a grand global project. The objective of the Census was to survey and analyze changes from past to present in marine life biodiversity, distribution and abundance, and to compile the resultant data into a comprehensive database called the “Ocean Biogeographic Information System (OBIS),” to be used in forecasting the future of marine life.

The CoML comprised a global network of over 2,700 researchers in more than 80 nations who engaged in a 10-year investigation of ocean life forms, commencing in 2000. Census projects were divided into three major research components, respectively focusing on the past, present and future of marine life. To investigate the past, the History of Marine Animal Population (HMAP) studied historical archives. Teams of fisheries scientists, historians, economists and others conducted case studies in various parts of the world, analyzing data from various sources, such as old ship logs, monastic records, restaurant menus, fish bones and shell middens. From these studies, HMAP researchers produced records providing a picture of life in the oceans before the advent of modern fishing.

The Ocean Realm Field Projects, through 14 field projects, investigated world oceans life of the present day. The areas of study included not only major shallow-water habitats (shore areas, coral reefs etc.) but also unique ocean realms, such as hydrothermal ecosystems, cold seep ecosystems, mid-oceanic ridges, and the Arctic Ocean. These projects were carried out using a combination of acoustics, engineering, genetics and other technologies.

The research component for forecasting future ocean life was organized under the rubric of the Future of Marine Animal Populations (FMAP). This group focused on integrating data from many different sources, including fishery and climate change, and on creating new analytical tools for predicting marine populations and the possible future composition of ecosystems.

As stated above, the CoML was a scientific initiative to assess and explain life in all the world’s oceans, including the compilation of centuries-old information and the prediction of the future of marine life. Census data on 28 million observations of 120,000 species were recorded in the Ocean Biogeographic Information System (OBIS) and posted on the Internet, to be made available to everyone around the world. Especially noteworthy is the fact that 5 million records are added to OBIS each year.

Moreover, the CoML was active in education and outreach initiatives to ensure that Census findings were communicated to a broad public audience in collaboration with artists, composers and filmmakers, even cartoonists and weavers. It is significant that diverse means of expression were used to disseminate research outcomes to the general public. To help develop the next generation of marine scientists, the CoML also implemented programs to enable many youngsters to help gather data on organisms in nearshore habitats.

There is scientific, economic and political importance in promoting comprehensive investigation and understanding of the ocean and its inhabitants. Indeed, the United Nations Convention on Biological Diversity requires that signatories collect information on living resources, though as yet no nation has a complete baseline of such information. The CoML's global network of researchers will contribute greatly to the collection of information on marine life resources and to formulating policies for biodiversity conservation, sustainable use of marine resources and so forth.

Though oceans cover about 70% of the Earth's surface, a great portion of the ocean still remains unknown, further out of human reach than land. The Census of Marine Life was an interdisciplinary and comprehensive project in which researchers from various fields collaborated to survey the history and diversity of ocean life. The Census of Marine Life was meant precisely to explore the true nature of life forms, which comprise a complex system in a closely interwoven natural environment. For this reason, the Census of Marine Life conforms well to the motive of the International Cosmos Prize, which upholds the principle of Harmonious Coexistence of Nature and Mankind.

This unprecedented international project, governed and promoted by the Scientific Steering Committee (SSC) of the Census of Marine Life, accomplished significant results. These achievements have made the SSC a deserving recipient of the International Cosmos Prize.

Census of Marine Life Timeline of Activities and notable events