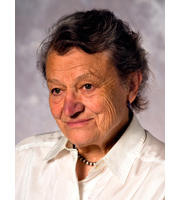 As a palynologist and wilderness advocate, Dr. Estella Leopold has made tremendous achievements by inheriting and further developing the Land Ethic philosophy, which was initiated by her father, Aldo Leopold (1887-1948), as well as by disseminating the idea to many places in the United States.

The “land” in the Land Ethic refers not merely to soil, but to a community whose members include soil, water, plants, animals, and humans. In this community, all members constitute a relationship of interdependency and interaction with each other. In other words, each member of the ecological community cannot survive outside of this relationship, whose maintenance enables the continuation of its life. This is precisely what is meant by the Harmonious Coexistence between Nature and Mankind.

A Sand County Almanac (Japanese translation: Yasei no uta ga kikoeru, Kodansha Gakujutsu Bunko) was written by Aldo Leopold and published after his death. It suggested, from the Land Ethics perspective, the importance of the earth’s limited natural resources, marking a sign of forthcoming conservation activities. His daughter, Dr. Leopold–along with her siblings–has followed in his footsteps in pursuing this idea. With a firm belief in the Land Ethic as a governing principle of her activities, she has been engaged in conservation activities at many places in the United States.

Most notably, she has dedicated herself to activities for the preservation of the Florissant Fossil Beds in Colorado, providing the scientific basis, through pollen analysis, for the necessity of their preservation and protection. The Florissant Fossil Beds, which include fossilized trees, fish, birds, insects and many other living things, are now an internationally famous National Monument thanks to her leading role in the activities that saved these beds from development. Furthermore, although Mount St. Helens, Washington, lost as much as 600 km2 of its neighboring forest due to an eruption, it was Dr. Leopold’s distinguished leadership that galvanized a subsequent movement toward the creation of a national monument. This area provides one of the few laboratories for studying ecosystems after their living members have been decimated. In addition, she has conducted research and studies into dam construction in the Grand Canyon, thereby helping approximately twenty non-profit organizations to work in concert with each other on environmental conservation activities.

It is safe to say that the creation of these national parks and monuments–as well as related preservation activities–have made a significant contribution to human society by leaving natural heritage sites to be handed down forever.

These achievements are attributable to Dr. Leopold’s astute insight and strong will with which she, together with her siblings, has honored her father’s achievements and continued his legacy, the Land Ethic. There are few individuals who span generations and show others how humans can live in harmony with the land. In addition, for the purpose of carrying on the family’s work, she worked for the establishment of the Leopold Foundation in 1982. She is still engaged in the management of the Foundation as its director and as the chairperson of its scientific research committee while pushing to broaden its educational outreach program and weave the Land Ethic into the fabric of people’s lives and society.

Dr. Estella Leopold has propagated the Land Ethic, made numerous proposals on a wide range of conservation issues, and implemented those proposals in the United States, which is one of the developed countries facing environmental problems. As such, her achievements, which have universal value for activities all over the world that advance environmental protection and bio-preservation, are considered highly deserving of the 2010 International Cosmos Prize, whose objective is to promote the Harmonious Coexistence between Nature and Mankind.