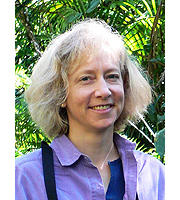 Dr. Gretchen Daily is a researcher who has provided us with a comprehensive picture of the value of biodiversity-based ecosystem services, upon which human society is dependent. She has made a vital contribution to international initiatives such as the U.N. Millennium Ecosystem Assessment, and played a leading role in launching the “Natural Capital Project,” which is a result of the fusion of ecology and economics, in order to promote the sustainable utilization of natural capital.

While the global environment is greatly affected by human activity, economic activity is dependent on and benefits from a range of ecosystem services. In her book Nature’s Services published in 1997, Dr. Daily first set forth the nature of these benefits and their value, which had previously been underestimated, in a comprehensive manner, while clearly presenting the necessity of conserving biodiversity and ecosystems. That nature provides valuable ecosystem services is now a well understood and key conservation concept. Dr. Daily has made a tremendous contribution through her involvement in the genesis of this concept from the time it was first proposed.
Aimed at assessing the impact of the changes in ecosystems and ecosystem services on human life, the Millennium Ecosystem Assessment was integrated with the International Program on Ecosystem Change (IPEC), the formation of which had been advocated by Dr. Daily among others, and was then implemented. Dr. Daily played a major role in tackling the seminal issues of formulating the concept of ecosystem services and enabling the related quantified assessment, thereby making a huge contribution to achieving the goal of the Assessment.

Furthermore, Dr. Daily founded the “Natural Capital Project,” integrating ecology and economics. The project, which demonstrates that the conservation of nature is capable of generating profit, is currently recognized as an international undertaking whereby the findings of science are being translated into social action and is being implemented in such regions as the U.S., South America, Asia, and Africa. Notably, she led a project that encompassed an area of 105 square kilometer in O’ahu, Hawai’i, where InVEST, a software program for mapping and evaluating ecosystems, was used to collect scientific data on which she designed specific plans and directions. In this project, investments were made in natural capital to boost the productivity of farmland through soil improvement. Other activities were also promoted, such as wind and solar power generation, the restoration of the historic and cultural site of Loko Ea Fishpond, and environmental education. This project exemplifies perfectly the value of the “Natural Capital Project.”
Dr. Daily has indicated the directions that should be taken in the future and has constantly asserted that participation by the private sector is required for sustainable economic advancement which takes environmental conservation into consideration, and that scientists have an obligation to provide the relevant scientific grounds for sound decision-making.

In summary, Dr.Daily established the concepts of ecosystem services and natural capital, pioneered the field of interdisciplinary studies, showing that the objective of conserving biodiversity and ecosystems is compatible with the well-being of the human population and social advancement, and blazed a trail for the practical application of these concepts. Her achievement is consequently considered richly deserving of the 2009 International Cosmos Prize, whose governing principle is Harmonious Coexistence between Nature and Mankind.