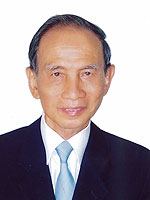 Dr. Phan Nguyen Hong pioneered research and activities related to the revival and preservation of mangrove areas in the Socialist Republic of Vietnam. He is also a prominent researcher with many accomplishments accorded worldwide recognition in the fields of tropical mangrove taxology and ecology.

In Vietnam, much of the land was badly ravaged by protracted warfare. Particularly serious was the damage done to the ecosystem from the spray application of defoliant by the U.S. military. Some 1,240 square kilometers, or about 40 percent, of the country's total mangrove areas were damaged by the defoliant. Mangroves are found along the coastlines of about 110 countries in tropical and subtropical zones. The forests have a combined area of about 160,000 square kilometers. The term “mangrove” does not designate a single tree species; it is a collective one for more than 100 varieties that grow in tidal zones. Sometimes called the “forests of the sea,” mangroves provide a habitat for much wildlife and create a distinctive ecosystem. In addition, they are used for lumber, fishery, and other businesses, and serve as natural breakwaters preventing coastal erosion and damage from waves. The lives of the Vietnamese people dwelling along the coast of the Indochina Peninsula have been closely intertwined with the benefits of mangrove areas.

For more than 4 decades since 1964, Dr. Phan has been engaged in investigative research in the fields of mangrove taxology and ecology, and has made a precious contribution as one of the key people in the movement to restore mangrove areas that had been destroyed. Distinguished by his strong ties with local communities, his approach consists of the process of setting targets and making plans with local residents, performing preservation work with their participation and their children, and taking steps to assure the local livelihood. It may be exemplified by his efforts in the Can Gio district, where a mangrove area covering 400 square kilometers was completely erased during the Vietnam War. Dr. Phan's work here was solidly grounded in the findings of scientific studies on items including soil contamination by the defoliant and the genetics of the mangrove plants. Thanks to his endeavors, a mangrove area measuring 220 square kilometers has been restored and is again becoming home to monkeys, otters, large cranes, and other creatures that had once vanished from it. The Can Gio mangrove area has received worldwide acclaim as an unprecedented example of restoration of a forest ecosystem, and was designated as a biosphere reserve by the United Nations Educational, Scientific and Cultural Organization (UNESCO) in 2000.

Mangroves act as a bridge between the sea and coastal zones, and form ecosystems that embrace human activity. Their revival is therefore vital for both ecological and socioeconomic reasons. Thus, the research activities of Dr. Phan have a broad and universal significance. In the prevailing atmosphere of heightened concern about protecting biodiversity and preventing global warming, the achievements of Dr. Phan, who long ago pointed out the importance of these issues and took action to address them, must be regarded as particularly outstanding.