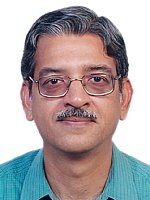 Recipient of the 2006 International Cosmos Prize, Dr. Raman Sukumar was born in Madras (known officially as Chennai), India in 1955.

Dr. Sukumar is the world’s leading researcher on Asian elephants and other related ecological concerns in India.

Dr. Sukumar's academic achievements include research activities in the fields of ecology and conservation biology in the Western Ghats. In particular, his research on the ecological relationship between humans and elephants and the resolution of conflicts between them has been internationally recognized as pioneering work in the little explored field having to do with the coexistence of wildlife and humans.

As in the case of endangered African elephants, a sharp decline in the population of Asian elephants has brought the issue to international attention. Dr. Sukumar has been conducting biological and ecological research for over 25 years, accumulating comprehensive research results concerning the lesser-known Asian elephants.

Although considered dangerous, elephants have been exploited by humans for their strength and intelligence. Thus, an abundance of understanding and knowledge about elephants has been amassed. In modern times, however, due to the deteriorating living conditions of elephants, agricultural crop depredations by elephants, and the replacement of elephant labor by machinery amid deforestation and land development, the relationship between humans and wild elephants has drastically changed, causing severe tensions and conflicts to ensue. Consequently, nearly 500 people a year are killed by elephants in West Bengal alone, while the population of elephants is decreasing due to such reasons as killings by humans. Based on the results of his ecological and ethological research on elephants, Dr. Sukumar has developed numerous methods to resolve such conflicts, paving the way for the coexistence of elephants and humans. For example, he has made possible the telemetering of wild elephants, using collars equipped with transmitters that track their positions at all times via a satellite navigation system. This has led to an increase in ethological knowledge, which has enabled the creation of maps to track the behaviors of elephant herds. It has also led to the development of a warning system to alert villages when a fierce elephant, or herd of elephants, is approaching. Moreover, he has found important corridors in elephant habitats, which he has sought to protect with guidelines for land use policies. Thus, his work is based on the recognition that segregating elephants from humans and keeping them in peaceful habitats will result in their protection and conservation, thereby saving them from extinction. Dr. Sukumar’s research has provided a scientific platform for a number of programs in Asia for the protection of wild animals. It is of great significance that he has indicated the possibility of coexistence with the world’s largest land animal, which requires a vast area as habitat in Southeast Asia, where the population is growing rapidly. His methods provide many suggestions that can be usefully applied to the conservation of other animals.

Furthermore, Dr. Sukumar has expanded certain fields of research into other areas related to elephants and made a range of scientific contributions, for which he has garnered praise. Examples of these contributions include his explanations of how natural climate changes over the past 40,000 years has formed the Western Ghats and Nilgiri Hills and his predictions on how future climate changes will impact the region’s animal and plant ecology. Also, through his investigations, he has shed light on how fires influence forest diversity and structure as well as how diversity determines bird community structure.

Dr. Sukumar has made and implemented many proposals on biodiversity conservation and the preservation of the natural environment in India, where the population and urbanization rate are rapidly increasing. For its universal approach in preserving the natural environment and its efforts to conserve life amid the urbanization that is taking place throughout the world, Dr. Sukumar’s work deserves the honor of the 2006 International Cosmos Prize, which aims for the “harmonious coexistence of nature and mankind.”