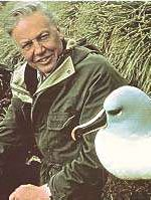 Among the magnum opuses of Sir David Attenborough is “Zoo Quest,” a TV program that the BBC broadcast throughout Europe for the decade commencing in 1954. In this series, the life of animals in the wild was filmed in Africa, South East Asia, South America, Australia, and other parts of the world. After that, Sir David Attenborough continued to produce outstanding documentaries, one after another: “Life on Earth (1979),” a series on the evolution of life on this planet; “The Living Planet (1984),” depicting the natural world from an ecological perspective; “The Trials of Life (1990),” describing the struggle for existence among wild animals; and “The Private Life of Plants (1995),” showing how plants struggle for existence in various habitats. These series have been broadcast in many countries in the world and have received great acclaim. In the 20th century, science has made breakthrough progress through analytical and reductive research methodologies. In the field of life science also, molecular research has developed at an unprecedented pace. At the same time, it cannot be denied that people, affected by such scientific progress, threaten to lose the real vision of life-forms, the subjects of such analytical research. Sir David Attenborough has described particulars of struggles among life-forms through films, strongly advocating an important perspective of grasping phenomena connected with life-forms in a comprehensive manner. In this respect, his works have underlined basic aspects of biology by presenting a holistic view of the natural world, raising incisive questions about today's science and presenting insightful suggestions. Sir David Attenborough's films feature not only beautiful images of rare life-forms and unique ecologies, but also a clear perspective, with deep understanding and a straightforward approach to the essentials of global life, such as the evolution of life, various ecologies, struggles for existence and interdependence of life-forms. All of his works have strong appeal for international audiences in that they express deep awe of life and a strong will to seek an answer to the question “What is life?” In this respect, his works have provided audiences with vital pointers in considering how people should coexist with nature. For these achievements, Sir David Attenborough has received high acclaim as a researcher as well in the United Kingdom: he was selected as a Fellow of the Royal Society in 1983, and was knighted in 1985.

Therefore, we have concluded that his achievements are surely worthy for the award of the International Cosmos Prize, the aim of which has been to search out and give recognition to individuals and teams from all over the world that have contributed to promotion of the basic concept of the Prize, The “Harmonious Coexistence of Nature and Mankind.”