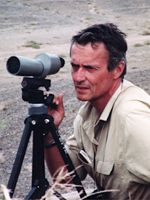 Dr. George Beals Schaller has been engaged in continuous research on wild animals, based on field surveys, from his university days to the present covering many regions of the world, including North and South America, Asia and Africa, and has targeted a large variety of wild animal species.

He has focused on direct observation of individuals and groups of individuals, as well as the relationships among individuals and among different species, which is what comprised animal society. Studying the particular traits of each animals in detail, and becoming aware of the differing characteristics of each living creature, he has conceptualized the relationship among them and searched for laws that govern the course of their lives.

There is a tendency to think that wild animals live a leisurely life out in the great wild. In reality, however, they often live in extremely severe conditions bound by numerous restrictions. For example, his research on wild pandas has revealed that these creatures, originally carnivores, have undergone an unusual evolutionary change to a diet of difficult-to-digest bamboo.

Also, to avoid wasting energy, the panda has developed an enlarged body. Through this process, the animal we know as the panda today has evolved on the earth.

This is an example of how he has studied the unique features of various large animals over many years through field surveys.

He has observed the relationships between nature and animals' lives, built up through a long evolutionary process and has scientifically presented this relationship as the common factor supporting their survival.

By comparing the different evolutionary courses of large mammals, and maintaining an integrated viewpoint, he has also thrown light on the true nature of the problems that beset human beings.

His achievements which present new values to guide our human life style are epochal as we approach the 21st Century. 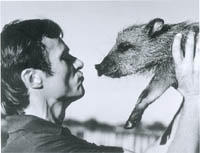 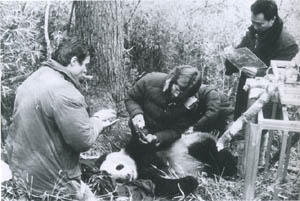 Wolong Natural Reserve, Sichuan (1981).
From 1980-1985, Dr. Schaller collaborated with Chinese scientists in the first detailed study of giant pandas.
Here he (on left) and his main coworker Hu Jinchu (on right) measure a sedated panda before radio-collaring it. 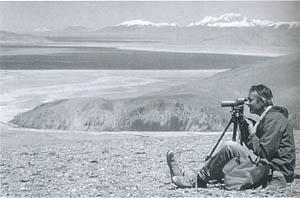 Northwest Tibet (1992). For the past ten years, Dr. Schaller has concentrated his research and conservation activities on the Chang Tang region of northern Tibet, a highland mostly above 4500m, to study Tibetan antelope, wild yak, and others. A reserve, 334,000 sq km in size, was established as a result of the joint effort by the Wildlife Conservation Society and Tibet's Forestry Department.