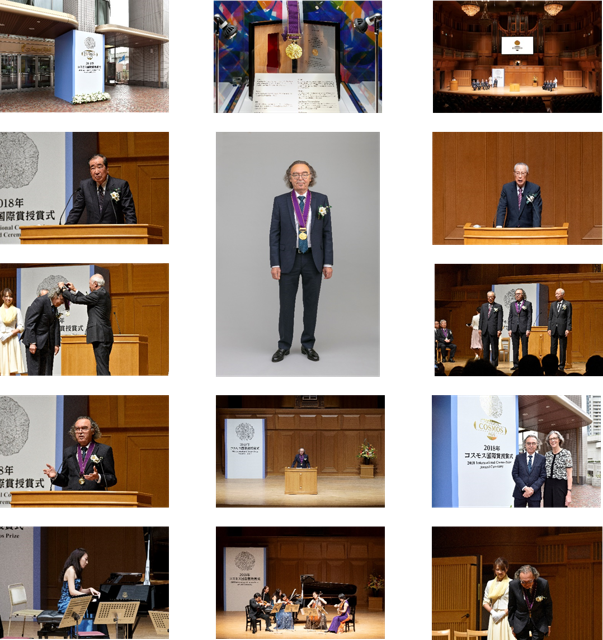 Some 370 participants attended the event, including distinguished guests from Japan and abroad. At 3:00 p.m., the Ceremony commenced with the majestic strains of pipe organ music.

The 2018 International Cosmos Prize commemorative and the Earth Hall of Fame KYOTO 10th anniversary lectures and symposium were held at Symposium Hall, Kyoto University (Sakyo-ku, Kyoto) on October 21, 2018 under the cosponsorship of the Research Institute for Humanity and Nature (RIHN). Prize recipient, Dr. Berque delivered a commemorative lecture. Then, Dr. Berque and Dr. YAMAGIWA Juichi had a discussion. After that, many speakers had discussions.

In addition, the 2018 International Cosmos Prize commemorative lectures were held at Yasuda Auditorium, The University of Tokyo (Bunkyo-ku, Tokyo) on November 19, and at Hirose-no ma, Sendai International Hotel (Aoba-ku, Sendai) on December 2.

At Tokyo, Dr. Berque delivered a commemorative lecture after the introduction by Dr. AKIMICHI Tomoya. After the lecture, there were active Q&A sessions.

The 2018 International Cosmos Prize commemorative and the Earth Hall of Fame KYOTO 10th anniversary lectures and symposium, the 165th RIHN seminar: Japanese View of Nature ― Interdisciplinary Dialogue on the "Nature and Humanity''